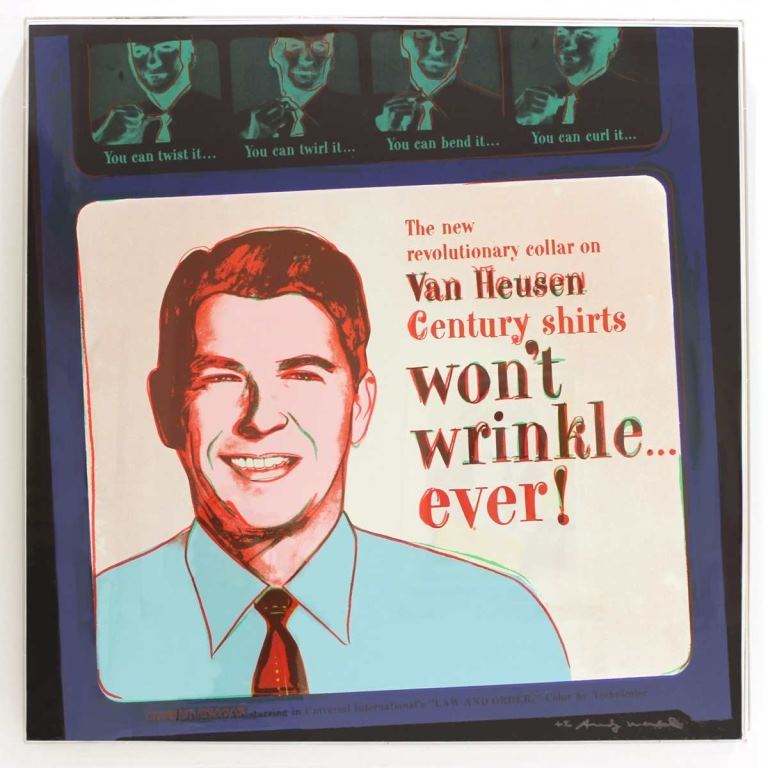 VAN HEUSEN 356
Former United States President Ronald Reagan was featured in a series of advertisements for Van Heusen dress shirts while he was still an actor in the ‘50s and ‘60s. The iconic, clever, and ironic imagination of Andy Warhol found inspiration in the series of advertisements in juxtaposition with the former President. According to Donna De Salvo (2003) this series of screenprints for Warhol’s portfolio titled Ads 1985 are imbued with “slick and perfect surfaces” and “candy-coated renderings” characteristic of Andy Warhol’s pop art (Feldman p. 31).

VAN HEUSEN 356 AS PART OF ANDY WARHOL’S LARGER BODY OF WORK
Andy Warhol began his career in commercial advertising. Warhol’s fascination with the commercial world continued throughout his career as an artist. Warhol created the Ads portfolio based on popular advertising campaigns and logos in Contemporary American culture. These advertisements were not simply a means to sell products, but had become an integral part of American culture. Warhol included the Paramount, Apple and Mobilgas logos, as well as advertisements that featured well known celebrities, such as Judy Garland in Blackglama Fur, and Ronald Reagan for Van Heusen apparel.