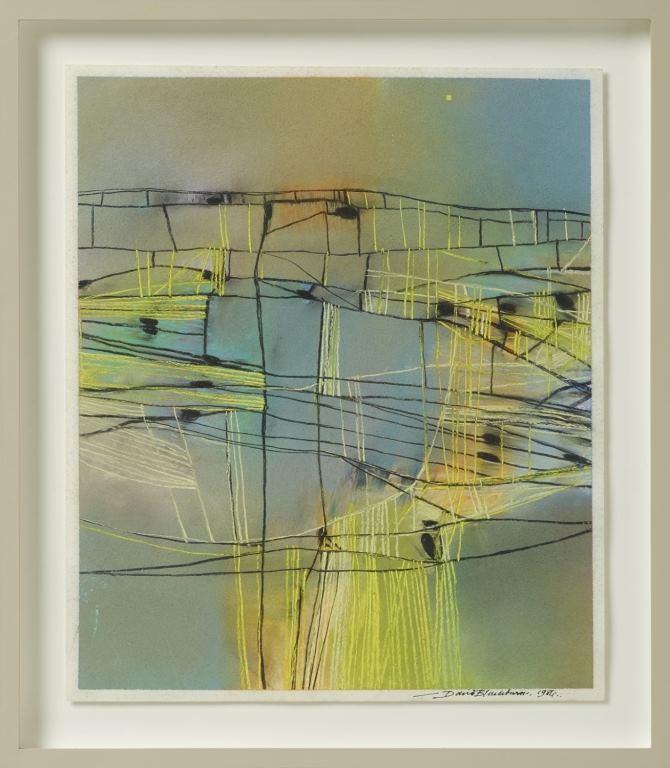 The location of the landscape in this work is not specified. However the black lines and blue grey tones could refer to the sprawling dry stone walls that traverse West Yorkshire. These combine and contrast with vivid yellows which represent sunlight to form textures and abstract patterns that possibly hint at Blackburn’s background in textile design at the RCA.

David Blackburn MBE (1939 - 2016) was a British artist who worked almost exclusively in pastels. Born in Huddersfield, he was noted for his highly evocative semi-abstracted depictions of the Yorkshire landscape.

Blackburn studied at the Huddersfield School of Art and then the Royal College of Art, London. After leaving college, Blackburn travelled to Germany, France and Italy for a year before accepting a position at the Royal Melbourne Institute of Technology. During his time in Australia, he was deeply affected by the work of Fred Williams, who helped him develop an understanding of space away from the “European concept of foreground, middle distance and background”, which he increasingly regarded as irrelevant.

In 1981, Blackburn took up a position as a Visiting Professor at Georgetown University in Washington D.C. At this time he became influenced by the vertical perspectives of the American cityscape, and began to experiment with electronic imagery and collage techniques. However, after this short period of experimentation, Blackburn realised that his “inner life was based in the natural world, not the city”, and subsequently embarked on a complex and long-running sequence of transcendent pastel drawings known as the ‘Landscape Vision’ series.

Blackburn’s work is now held in public and private collections all over the world, including the British Museum, the Art Museum of South Australia and the Museum of Modern Art in New York.

‘Driftin’ Back: I Used To Dig Picasso (after Neil Young)’
Chris Gollon