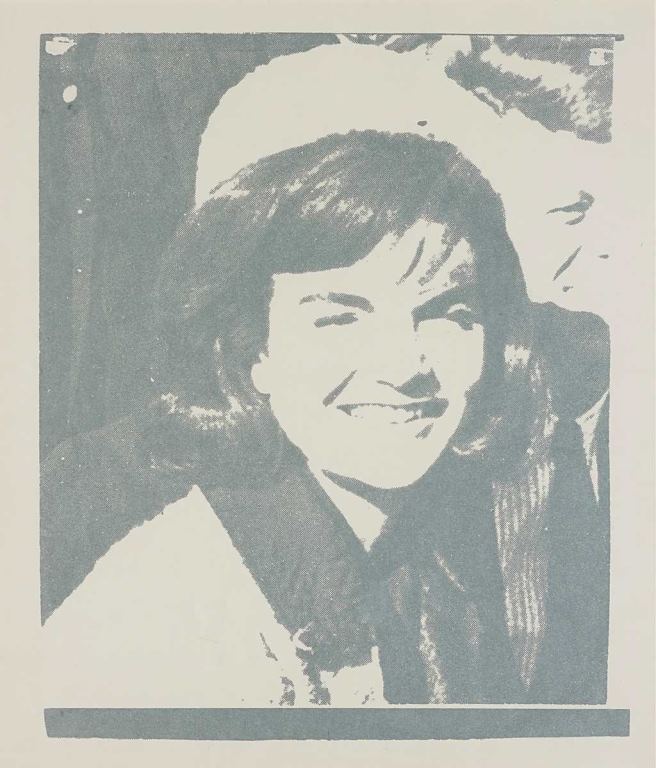 JACQUELINE KENNEDY I 13
Jacqueline Kennedy I (Jackie I) 13 is a single portrait of President John F. Kennedy’s wife and was based on a photograph that came from the December 6, 1963 edition of Life magazine. The magazine featured images from President JFK’s assassination and funeral. Warhol used the images of Jacqueline Kennedy, who was iconic in her own right, to create a number of different pieces. This piece is an example of Warhol’s early works in which very little changes were made to the original photograph; the color palette is simply black and white. This image shows a smiling Jackie, in her classic pillbox hat, sitting next to JFK prior to his death. The print was part of a portfolio entitled 11 Pop Artists I, and the other artists featured in the portfolio were Allan D’Arcangelo, Jim Dine, Allen Jones, Gerald Laing, Roy Lichtenstein, Tom Phillips, Mel Ramos, James Rosenquist, John Wesley and Tom Wesselmann.

JACQUELINE KENNEDY I 13 AS PART OF ANDY WARHOL’S LARGER BODY OF WORK:
Jacqueline Kennedy was and continues to be an American icon. By using images lifted straight from Life magazine, Warhol was commenting on media frenzy. Warhol continued later in his career to comment on American society using images of women who were icons of cinema, media or politics. During this time in his career, Warhol was making the shift from graphic artist/commercial illustrator to pop artist. Warhol used eight different images of Jacqueline Kennedy to show the story of JFK’s death. The Jacqueline Kennedy series has become almost as iconic as the Marilyn images because she represents another side of the American celebrity, which is, in her case, royalty.