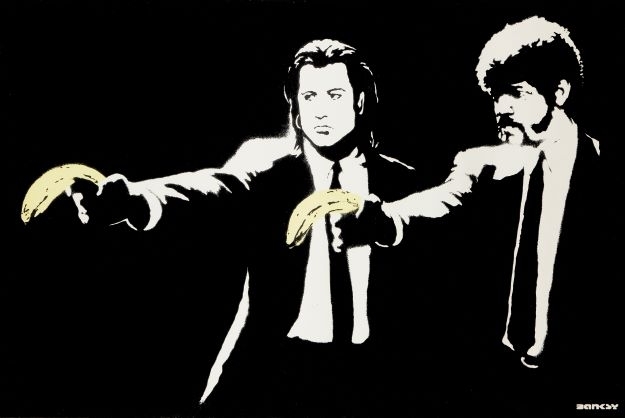 First appearing in 2002 as a large mural near Old Street Tube station in London, ‘Pulp Fiction’ presents a scene from Quentin Tarantino’s film of the same name, displaying John Travolta and Samuel L. Jackson side by side handling bananas in place of the guns featured in the original scene. This work is Banksy’s anti-gun statement, where he has rendered a violent scene harmless, through his use of Warhol-like bananas from the album cover for The Velvet Underground. This amalgamation of pop culture references subtly disguises Banksy’s more targeted message, presenting a somewhat humorous scene.

Note: this lot is accompanied by a Certificate of Authenticity, issued by Pest Control Office.

Untitled (I Am Listening)
David Shirlgey