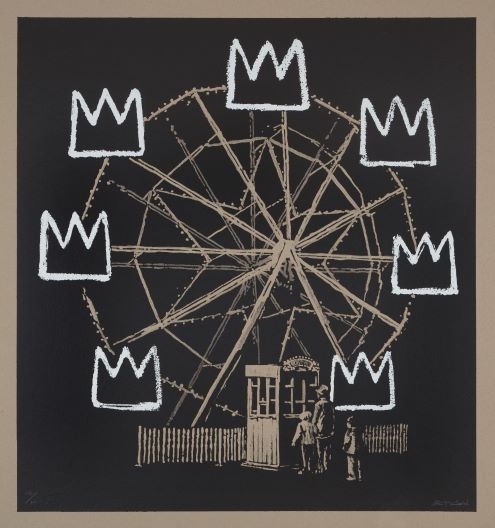 Banksquiat (Grey), 2019; screenprint on grey card, signed and numbered from the edition of 300 in white pencil, published by the artist, with their blindstamp, sheet 75 x 70cm (unframed) (ARR)

Banksy’s tribute to Jean Michel-Basquiat, this work presents Basquiat’s iconic crown emblem adorning a Ferris wheel, said to represent the cyclical nature of consumerism. It is no surprise that Banksy, an artist famed for his street art and political activism should look to Basquiat for inspiration, as Basquiat was one of the pioneers of street art in New York, with many of his works commenting on class struggle and power structures. This work also subtly references another artist who emerged from New York graffiti culture; Keith Haring. The chalk outlines used for the crowns was a recognisable feature of Haring’s artworks.

Note: this lot is accompanied by a Certificate of Authenticity, issued by Pest Control Office.