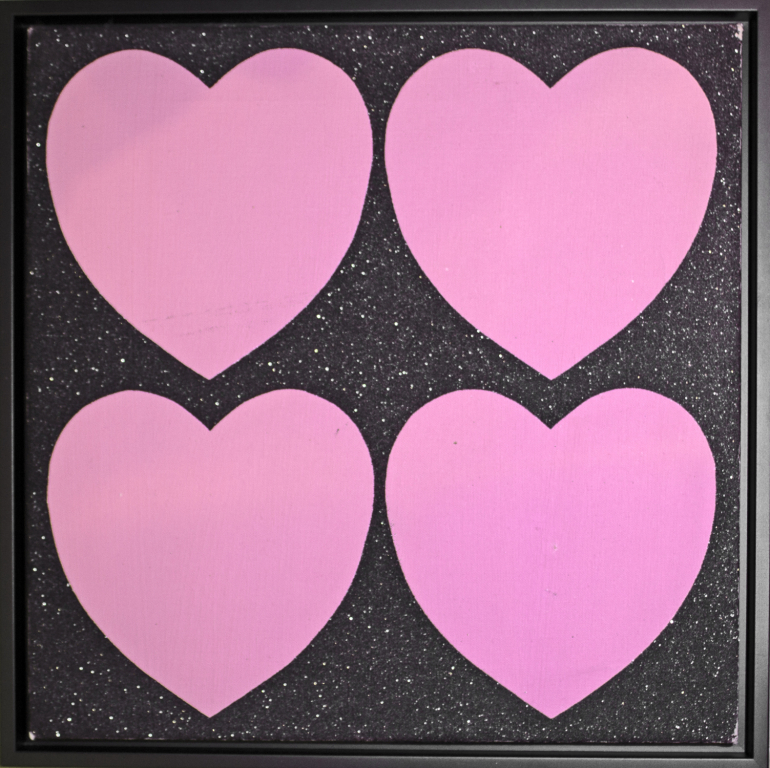 Four Hearts is a 1983 artwork by Andy Warhol. The piece features four identical pink hearts on a black canvas covered in diamond dust. In addition to his celebrity pop art pieces, Warhol was fascinated by love, as is shown throughout his works, including his Love suite and other manifestations of hearts throughout his portfolio. Warhol examined the different phases of love throughout his work. In addition to Four Hearts, Warhol explored similar themes through Candy Box (True Love), Sex Parts, and Love. However, his most abstract representation of love is in Four Hearts. The delicate pink coloring on a welcoming sparkly black background creates an illusion of depth in the work.

FOUR HEARTS BY ANDY WARHOL AS PART OF HIS LARGER BODY OF WORK
Andy Warhol elevated the mundane everyday items such as soups, Brillo pads, and even hearts. Through his art, Warhol exhibits the beauty within ordinary objects and familiar images. His subject matter tends to be things people usually forget to acknowledge. The symmetry of the piece gives it a machine-made aesthetic that is found in many of Warhol’s pieces. Machines and factories are essentials to the culture of mass production and conspicuous consumption that Warhol’s work constantly criticized.