Indelible Images Of The Restless Mind 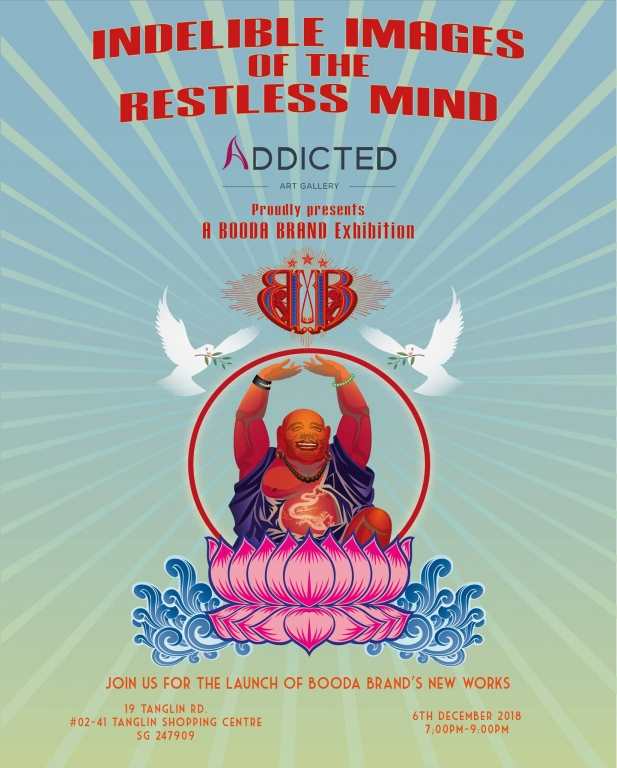 For over 200 years, prints have been put up on walls and used to announce, inform, to advertise, to protest and to provoke. The tradition continued in 2018 with Booda Brand’s Billy Ma launching two more prints into the universe on 6 December at the “Indelible Images Of The Restless Mind” exhibition.

Billy Ma is a Taiwanese-born, Canadian-raised, Italian-influenced (he grew up in a predominantly Italian immigrant community which has led to him to “still talk with my hands too much”) artist currently based in Singapore.

“I wanted to democratise and make my art accessible. I want it to be on as many walls world wide as possible.” ~ Billy Ma

A little bit about the new prints...

"Oh look! There’s a newly discovered planet that could possibly sustain life. There’s frozen water which could have nurtured life at one time, or even support ours in the future." But what about the planet we live on now? 71% of its surface is covered in water. Neptune Redemption entices you with its initial colour and beauty. Underneath that beauty is the ugliness of ocean refuse that grows exponentially with each passing day. Neptune Redemption is a call to arms to each of us to make a difference by reducing our usage of single-use disposable material. Together, we can redeem ourselves.

“Death Of The American Dream”

Influenced by the “The Death of Marat” (1793) by Jacque Louis David, Death of the American Dream reflects the iconic Uncle Sam as a personification of the U.S. and the moral good it once stood for. The beacon of freedom and democracy has fallen from grace. The world looks for new leadership. Developing countries come to the fore as the once revered American working class lags hopelessly behind.
This is the sign of the times as interpreted by Booda Brand.

Billy Ma is a painter, sculptor, designer and illustrator. He was born in Taiwan but raised in Canada. Having never lived in Asia as an adult, Billy took a chance with his wife and moved to Singapore for a new life adventure. 2009 saw Billy growing restless with his job as an art director in innovation and so he began to flex his artistic skills via digital illustrations during his spare time. With the popularity of the first images on social media and enquiries from interested buyers, Booda Brand - the limited-edition print company - was conceived. This thriving little art company now sells all over the world and has been exhibited across Asia. Drawing from contemporary themes, Billy seamlessly and naturally combines eastern and western aesthetics into his artwork. Many influences come from spirituality, socio-political issues and a sardonic sense of humour.
February 2020
March 2020
April 2020
Events archive