Global Art Traders (GAT) is fascinated by the talent of many of our member artists, some of which have an instantly noticeable style. In a series of short interviews, GAT investigates a little more about artist’s artistic history, creative process and their inspirations. In this series wewill be focusing mostly on our own member artists, as well as some guest interviewees.

First up is a guest interviewee, the charismatic artist Patrick Hughes. Patrick was well known in the 80’s for his rainbow pictures, but now,perhaps, is more renowned for his amazing 3d paintings.

Born in Birmingham on 20 October 1939, he now lives and works in the east end of London. Patrick has been married 3 times and has 3 sons. He is well known as the creator of ‘Reverspective’, an optical illusion where the parts of the picture which are the furthest away are actually physically the nearest. As well as being a fantastic artist, Patrick was also a teacher and is a designer and a writer of many books. He has been creating artwork for at least 55 years and is represented by Flowers Gallery, London.

David Field: Patrick, when did you first realize you wanted to be an artist?

Patrick Hughes: I met a woman who was an art student, Rennie Paterson, later I married her and took over her art production. 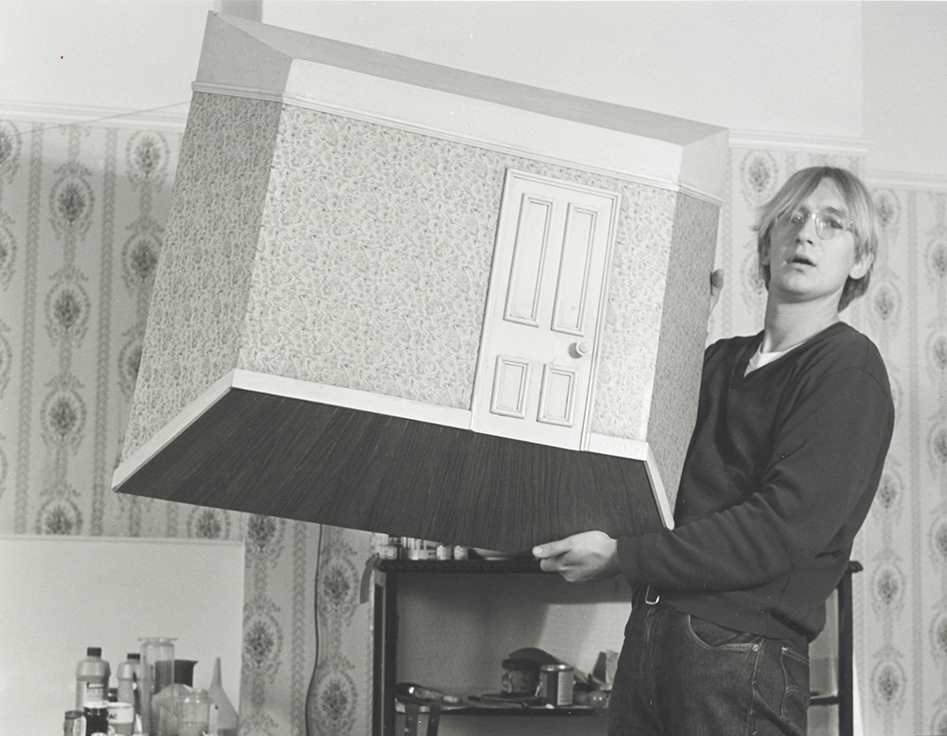 PH: My work is a visual and sensual paradox

PH: I used to paint flatly, now I work with great depth.

PH: I am working on many projects; I have a team of 10 artists helping me. I am always thinking of new ideas and what’s next.What I am working on doing is a staircase in reverse perspective.

DF: Choose one piece of your art and give me a critique

PH: I used to paint rainbows, and in the prison rainbow I wanted to paint it black, white and grey, which I first did, in the early 1960’s. Then in the seventies I thought of a reason for it! The reason for it becoming grey is because it is going into - or out of - a prison. 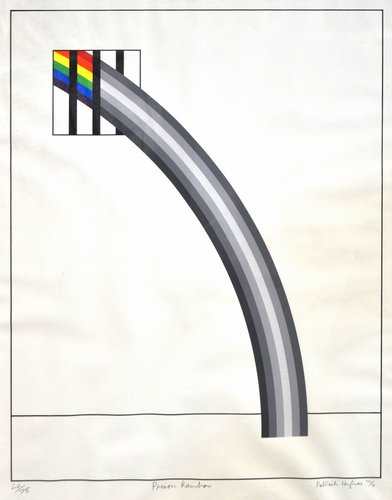 PH: I find it unexpectedly when my mind is empty of the practical.

PH: I was in a show which opened this month in Cologne. It’s a mixed show which includes work by David Hockney, Julian Opie and Michael Craig-Martin.

PH: Wayne Thiebaud because he has found a way to paint agriculture and architecture in a completely original way.

PH: Rene Magritte’s ‘The Human Condition’, Escher’s ‘Hand Drawing a Hand’ and one of my own Venice Reverspective paintings. 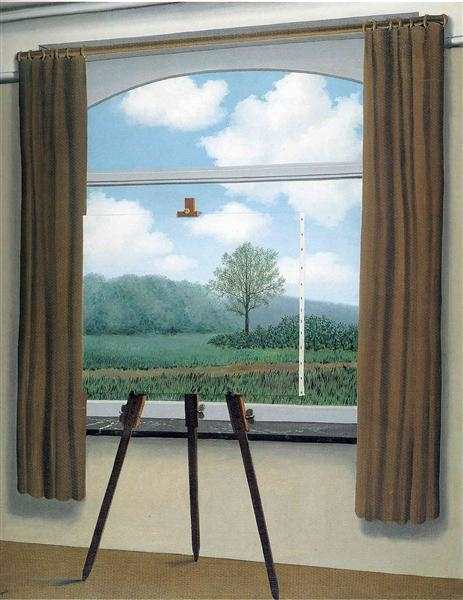 DF: Do you make a living from your art?

PH:Yes, I make a good living these days. However, in my 40’s I was always trying to make it big and times were sometimes tough.

DF: What’s the first artwork you ever sold? How much did you sell it for?

PH: Perhaps the first artwork I ever sold was in 1960. It was a painting of Liquorice allsorts. Everything was priced in guineas then, probably twenty guineas was the gallery price, and I got 66%. 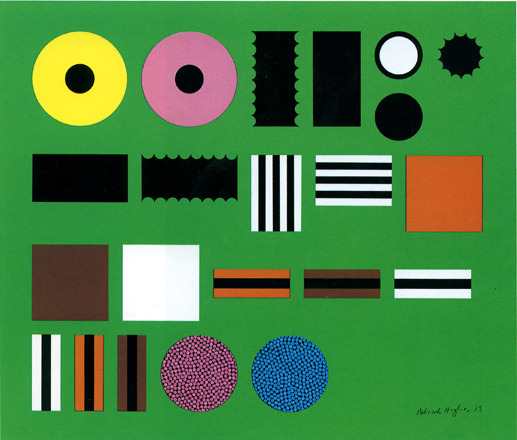 DF: What’s the last artwork you ever sold? What price did you sell it for?

PH: Probably the last artwork I sold was Velvety Venice,this was a 3d reverspective commission. I can’t divulge the price of a private commission; however my 3D multiples start at around £4’500 from Flowers Gallery, London.

DF: What annoys you most about the art world?

PH: It is a religion with priests and I am an atheist!

PH: You live on when you are dead!

PH: Imagination and intelligence are the qualities I prize in people and the things they make. Wit and humour manifest these two wonderful qualities. 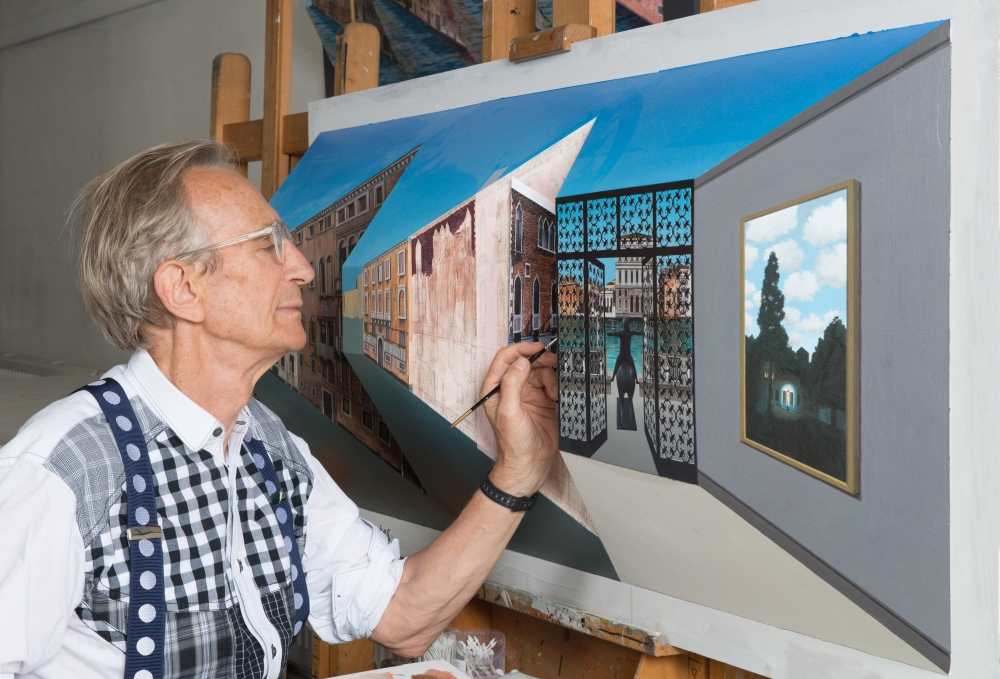 Patrick was interviewed in June 2016.

You can find artwork by Patrick Hughes in many worldwide galleries. In the UK he is represented by Flowers Gallery, 21 Cork Street, London, W1S 3LZ.

Patrick Hughes was recently featured in an article on The One Show on Thursday 19th May 2016. Patrick speaks to Phil Tufnell on the BBC television show about his reverspective paintings.

To watch the extract go to: reverspective.com/hughes-on-film and scroll down the page.

Gallery Focus View this email in your browser Gallery Focus: The Shayne Gallery We are very pleased to have The Shayne Read more...
Browse by category Recent posts Magazine archive