Andy Warhol, in an interview for Art News interviewer Gene Swenson, "The reason I'm painting this way is that I want to be a machine, and I feel that whatever I do and do machine-like is what I want to do". He strived to be artificial and machine like, through his lack of gestures and style, which paradoxically became his style or fingerprint. Warhol used his knowledge as an Illustrator and screen printing to his advantage. While Warhol wanted the world to believe he was a machine, Warhol methodically worked on creating his screen-prints. First he would choose an image he wanted to duplicate or recreate in his own vision, next he would create a sketch of what the final product was, after he would have the sketch image be made as a stencil on an acetate plate. Once Warhol approved the plate it was time to move on to screen printing. For instance, when Warhol was ready to create Marylin 29 he would have chosen the blue for the base, layered the paint on the screen and used pressure on squeegee to have the negative appear. This process would have been repeated to create the rest of Marilyn’s face, as well as layering each part of Marilyn face separately to achieve the color contrasts that create the highlights and shadows of her face. Watch a video of the process below to see Warhol and an assistant creating a single colored screen-print of actor James Dean.

The more successful and in demand Warhol became he was able to stop printing himself through Andy Warhol Enterprises, Inc and hired outside printers to create the final screen-printed works. Warhol preferred printer was Rupert Jasen Smith, and in 1977 Warhol hired twenty five year old Smith to be his Master Printer after they collaborated on creating the Hammer and Sickle silkscreens. Smith printed for Warhol until Warhol passed away in 1986. Having Smith as master printer allowed Warhol to achieve his vision of being a “machine”. Smith would create the final version of Warhol prints after Warhol's personal approval and Warhol added his signature by a rubber stamp. After this, Smith also worked with Warhol on printing the Reigning Queens , Endangered Species and the Shoes portfolios, as well as all the privately commissioned work Warhol in the 1980’s.

Warhol followed the tradition of many great artists to create a series of works based on the same object or idea, but Warhol took it a step further by creating series and portfolios of works that were different. He opted to pick everyday objects like Campbell’s Soup cans, flowers and boots, stripping them of meaning and methodically, working to create his own “advertisements” that were larger than the object itself, and layered in meaning and emptiness.

Warhol started his career creating portfolios such as his Marilyns series and the Campbell’s Soup Cans.Later he moved on to create portfolios that added variation, capturing the work around him, while staying true to his style of machine like style and mass production. Warhol chose anything and everything that surrounded his life. For example, his Flash portfolio used newspaper images from the Kennedy assassination, the Ladies and Gentlemen portfolio spotlighted drag queens that were in the vibrant New York nightlife that Warhol was a part of, and the Cowboys and Indians portfolio (Kachina Dolls) that mixes Hollywood Western icon's like John Wanye with iconic Native Americans, and cultural artifacts. The beauty of Andy Warhol’s portfolios is simple: they can be enjoyed as a single unit or a group, just like a soup or a soda.

Revolver Gallery, has the following soup can suites available for purchase. 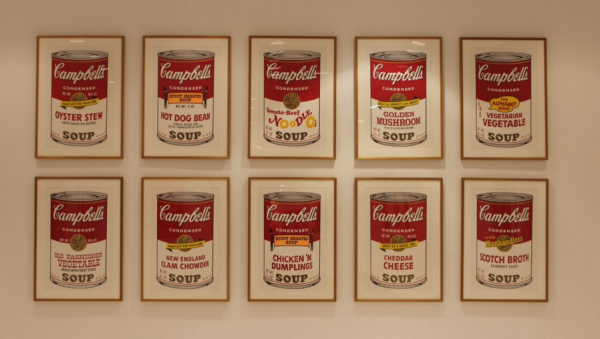 The Campbell’s Soup II full suite was printed in 1969 by Salvatore Silkscreen Co., Inc., New York. Part of a portfolio of ten screenprints on paper, included in this suite are: FS II.54 to FS II.63.

Andy Warhol’s Campbell’s Soup cans ushered in the Pop Art movement, and remain some of his most recognizable and popular works. The idea of using an object of mass consumption was something that Warhol played with throughout his career, as he was known to be fascinated by everyday objects, and their role in American society. In 1962, Andy Warhol first exhibited 32 Campbell’s Soup can paintings at the Ferus Gallery, Los Angeles. The paintings were displayed as though they were on an aisle of a grocery store. Following the exhibition, Warhol created two additional collections based on the soup cans; Campbell’s Soup I (1968) and Campbell’s Soup II (1969).

The Camouflage full suite was printed in 1987 by Rupert Jasen Smith, New York. Part of a portfolio of eight screenprints on Lenox Museum Board, they are signed and numbered in pencil on verso by the executor of The Estate of Andy Warhol, on a stamped certificate of authenticity. The colors are not accurately reproduced since they are fluorescent. The screenprints included in this suite are FS II.406 through FS II.413. 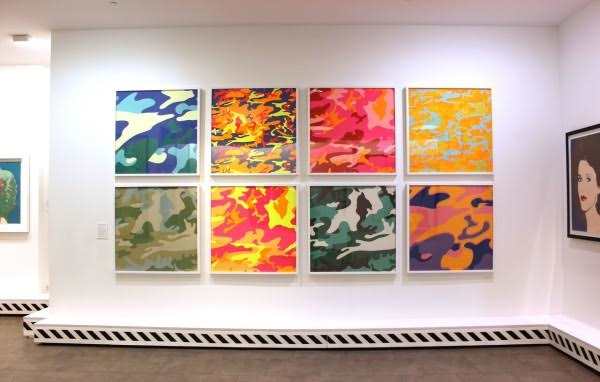 The Camouflage full suite was the final group of screenprints published before Andy Warhol’s death the same year. While still alive, Warhol had the opportunity to exhibit the Camouflage screenprints only once at a group show in New York, 1986. The pop artist was inspired to create the Camouflage suite after his assistant, Jay Shriver, told Warhol that he was working on abstract paintings by pushing paint through the mesh of the military cloth. Warhol had Shriver go to the local New York army surplus store near Union Station to buy some camouflage fabric. Once Shriver had returned with the fabric, it was then photographed, and the mesh was removed to only reveal the shapes and patterns of the fabric. Changing the originally muted militaristic color scheme to vivid pop colors, Warhol appropriated the composition of camouflage into striking abstract pieces of pop art. When Warhol died, the Camouflage portfolio was printed, therefore he was not given the opportunity to sign them. 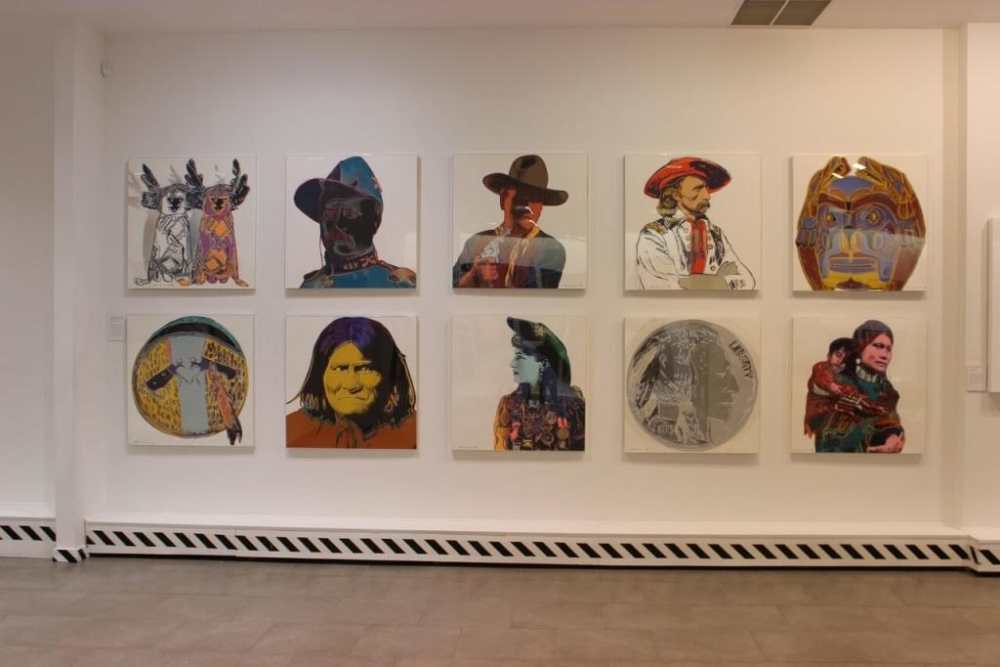 The Cowboys and Indians suite was printed in 1986 by Rupert Jasen Smith, New York. As portfolio of 10 screenprints on Lenox Museum Board, the prints are signed and numbered in pencil. Some John Wayne prints are unique and are dated and marked “unique”. Included in this suite are FS II.377 through FS II.386.

In 1986, Andy Warhol created the Cowboys and Indians series. In this portfolio, Warhol depicts an historical representation that mirrors a popular interpretation of the American West. Warhol interspersed recognizable portraits of well-known American heroes – Annie Oakley, Teddy Roosevelt, and General George Custer – with less familiar Native American images and motifs in his ironic commentary on America’s collective mythology of the historic West. Rather than portraying Native Americans within their historical landscape or Cowboys in their veritable forms, Warhol chose to portray a popular, romanticized version of the west. Warhol’s rendering of the American West was already an established presentation commonly portrayed in novels, films, and various television series popular during this era.

One of Warhol’s most famous series was his Death and Disaster series where he explored images of plane crashes, suicides and car crashes found in the media. They are his most controversial and thought provoking works, even today. Warhol first used the image of the electric chair in 1963, which was the year that New York State had its final to executions at Sing Sing Penitentiary. During that time, there was a lot of political controversy around the death penalty in America, which is why Warhol wanted to explore the idea in his work. Also, Warhol was preoccupied with all of the news reports about violent deaths and he felt that by taking images from the media and repeating them he would remove their meaning. He once said,“When you see a gruesome picture over and over again, it doesn’t really have any affect.” (Swenson, “What is Pop Art? Interviews with Eight Painters, Part I,” Art News 62 (November 1963): 24-27, p. 60-63) - Warhol continues with this idea throughout his career with many different subjects. 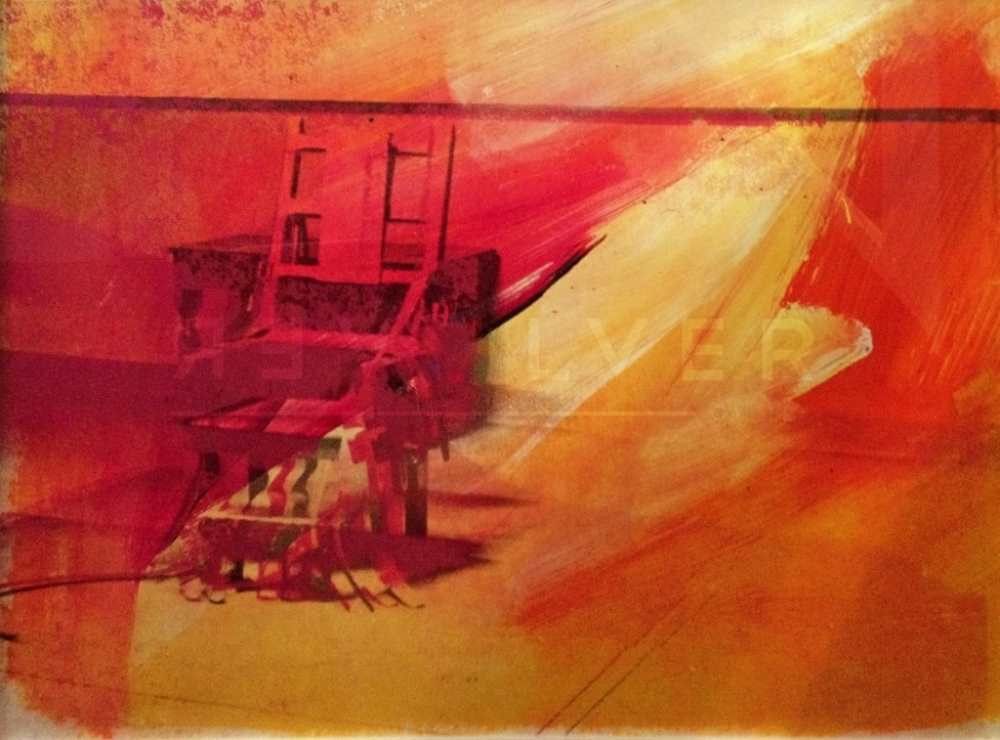 Warhol created a portfolio of ten different Electric Chairs in 1971. One of those ten has a mostly orange color to it. Out of the other prints in this portfolio, it also has a more painterly feel to it, with a yellow stroke through the center of it. While the other prints in this portfolio are mostly two colors, a foreground and a background, this particular print has more color variations in it. The idea of taking an object that held so much power, and isolating it, abstracting it and repeating it, is something that Warhol continued to do throughout his career. By doing so, the image is no longer about the electric chair and what it does, it’s about the image itself and the colors found in it. 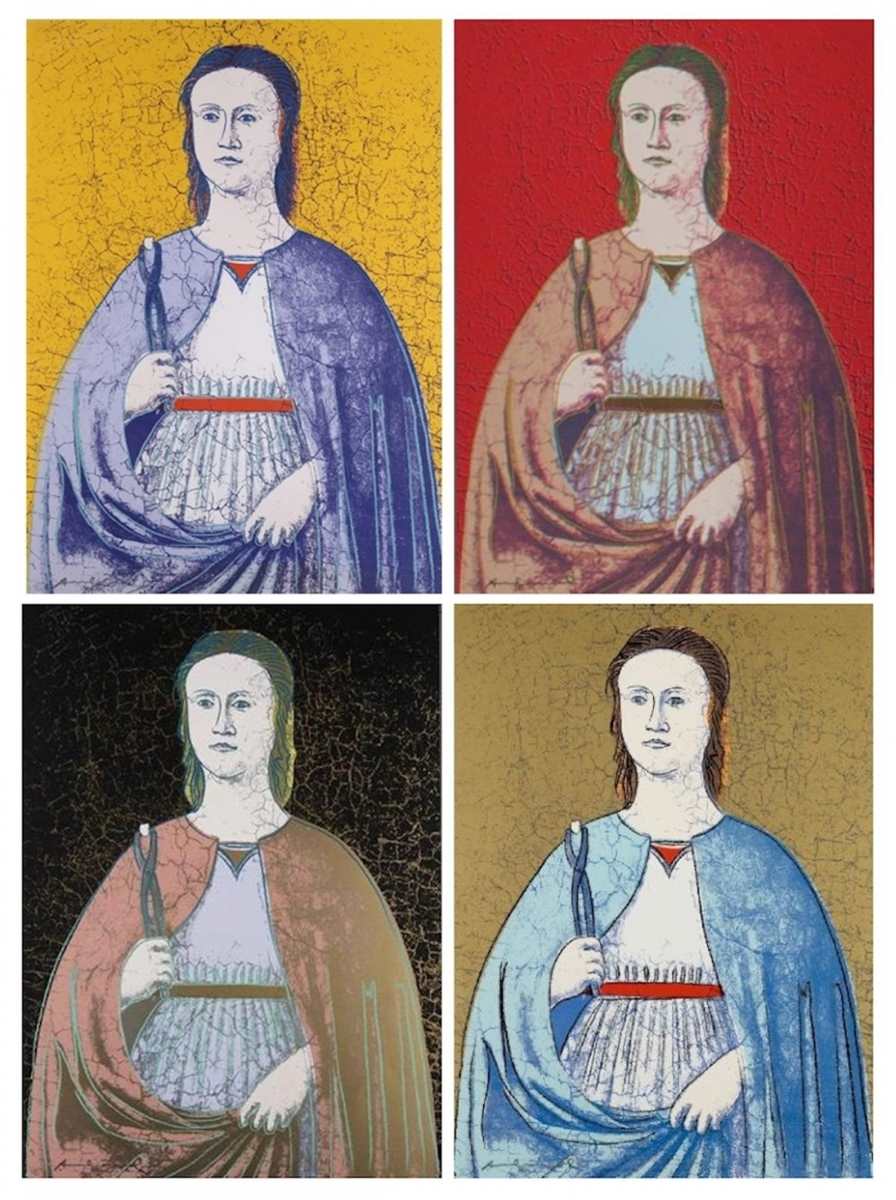 The Saint Apollonia full suite was printed in 1986 by Rupert Jasen Smith, New York. Part of a portfolio of four, Warhol’s Saint Apollonia are screen prints on Essex Offset Kind Finish paper. Included in this suite are: FS II.330 to FS II.333.

The screen print of Saint Apollonia is inspired by a panel painting attributed to the workshop of Piero della Francesca (1470). Apollonia is recognized as the patron saint of dentistry as it was believed that her teeth were broken with pincers during her martyrdom in the 3rd century. The 5th century painting hangs in the National Gallery, Washington, D.C. Warhol’s work, like that of many artists, studies themes surrounding religion and their inherent iconography. In this suite, it is his artistic respect for the icon that is uniquely notable. As opposed to applying color in broad strokes and having layers purposely misalign and bleed over each other, Warhol delicately executes his image. There is very little cropping in this print compared to the original painting he referenced, and he even preserves the ‘cracks’ from the original, almost treating the suite as an homage. 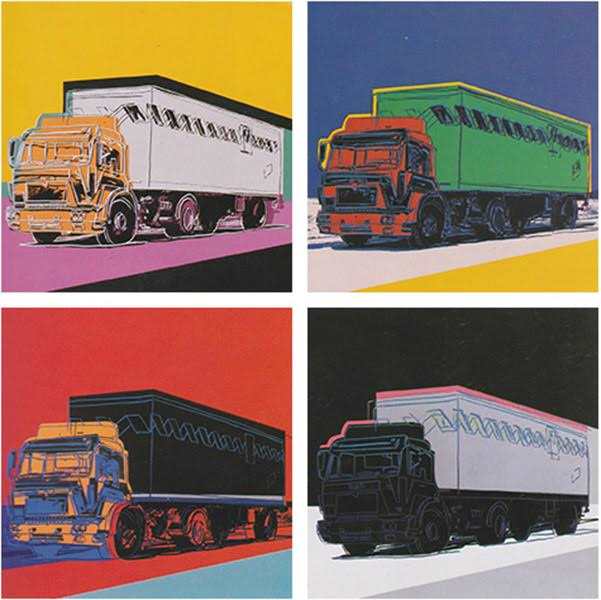 The Truck full suite was printed in 1985 by Rupert Jasen Smith, New York. Part of a portfolio of four screenprints on Lenox Museum Board, there are 5 numbered in Roman numerals, signed and numbered in pencil. Also, there are 73 individual TP not in portfolios, signed in pencil on the lower right and unnumbered. Included in this suite are FS II.367 through FS II.370.

The Truck full suite by Andy Warhol are screenprints that were published in conjunction with the Bundesverband des Deutschen Guterfernverkehrs to commemorate the 20th World Congress of International Road Transportation Union. This series showcases Warhol’s technique of multiple layering of saturated colors. The image of the truck in the screenprints are translucent and then layer over various colored backgrounds.

It could be said that Tibor Jakab is the complete photographer. He has been creating photographs commercially since around 1988. His photographs have been exhibited at International art photography salons in 50 countries, on 5 continents. He has been awarded 455 prizes for his work and had Read more...

Next up in our series of short interviews with artists is the one and only Dorel Cozma from Transylvania. Dorel is an artist with a love for abstract expressionism. Dorel has produced artwork for at least 30 years and is also a talented architect. His fantastic captivity series from 2014 i Read more...
Browse by category Recent posts Magazine archive