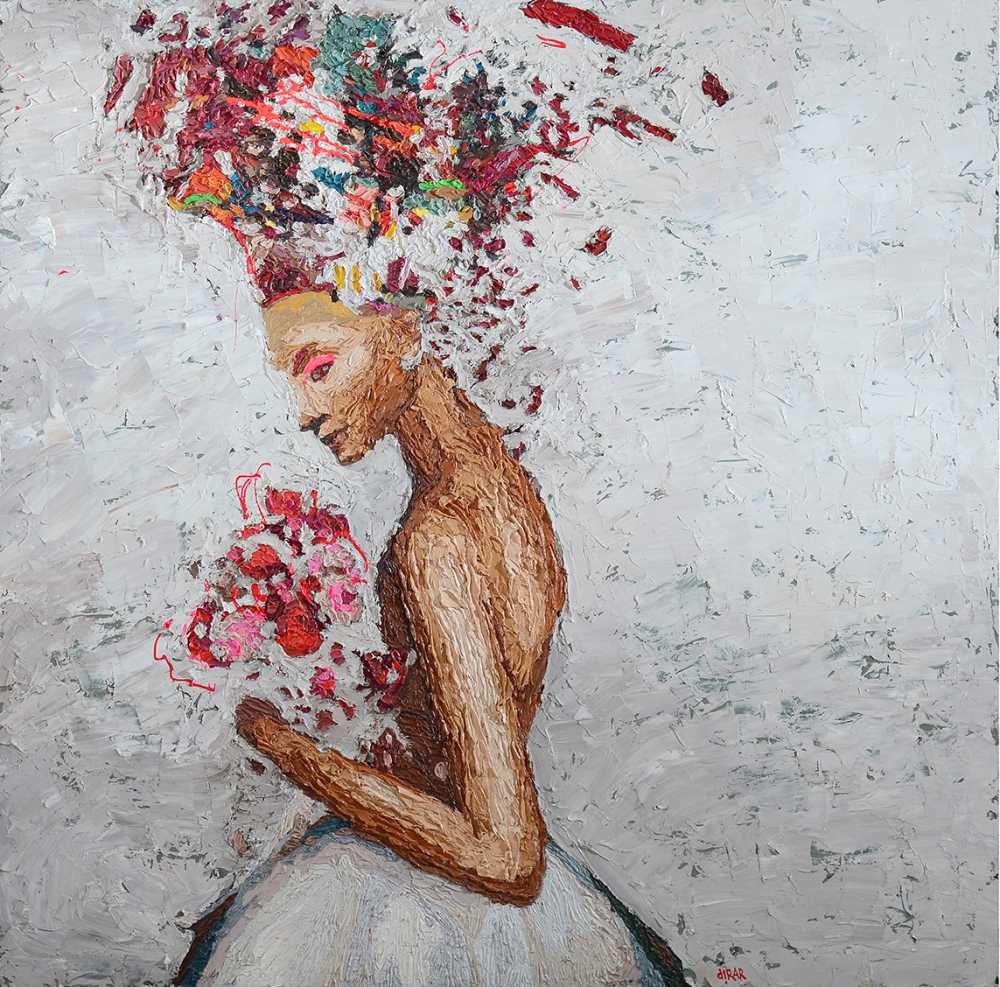 “Nefertiti” is a major solo exhibition by one of the most respected figurative painters in Egypt, Hossam Dirar, opened at Zamalek Art Gallery in Cairo on November 4th, 2018.

This powerful collection of works is a modern take of the artist on the elegant and mysterious beauty of the Ancient Egyptian queen Nefertiti. “Nefertiti” is translated as “The Beautiful One Has Come” but the word “nefer” means more than just beauty. It can also be translated as “goodness” and “perfection”.

Nefertiti would empower women to take a stand for their beliefs. She would encourage women to move out of the shadow.

In this series, Dirar also attempts to challenge the modern woman’s status quo by quoting the queen’s headdress on today’s women in contemporary attire, accessories, and posture.

Dirar’s vision is one of reckoning: through his work, he wishes to encourage today’s Egyptian woman to regain if only a fraction of the glory they once had in the past, same as the ancient Egyptian queen and goddess have had. His women are painted with dignity and pride, treading the line between the glorious past and the hopeful future of the Egyptian woman.

His technique is impressionistic: the organized chaos of brushstrokes that appear wild and textured at close inspection yet controlled and defined from a further stance. A palette of colorful florals against shades of grey, the paintings show bursts of color in a subdued background- to mirror bursts of hope in our present mode of life. “Nefertiti” is an exciting exhibition of paintings that hope to inspire the glorification of the Egyptian woman once more.

The exhibition is open to the public until November 19th, 2018. 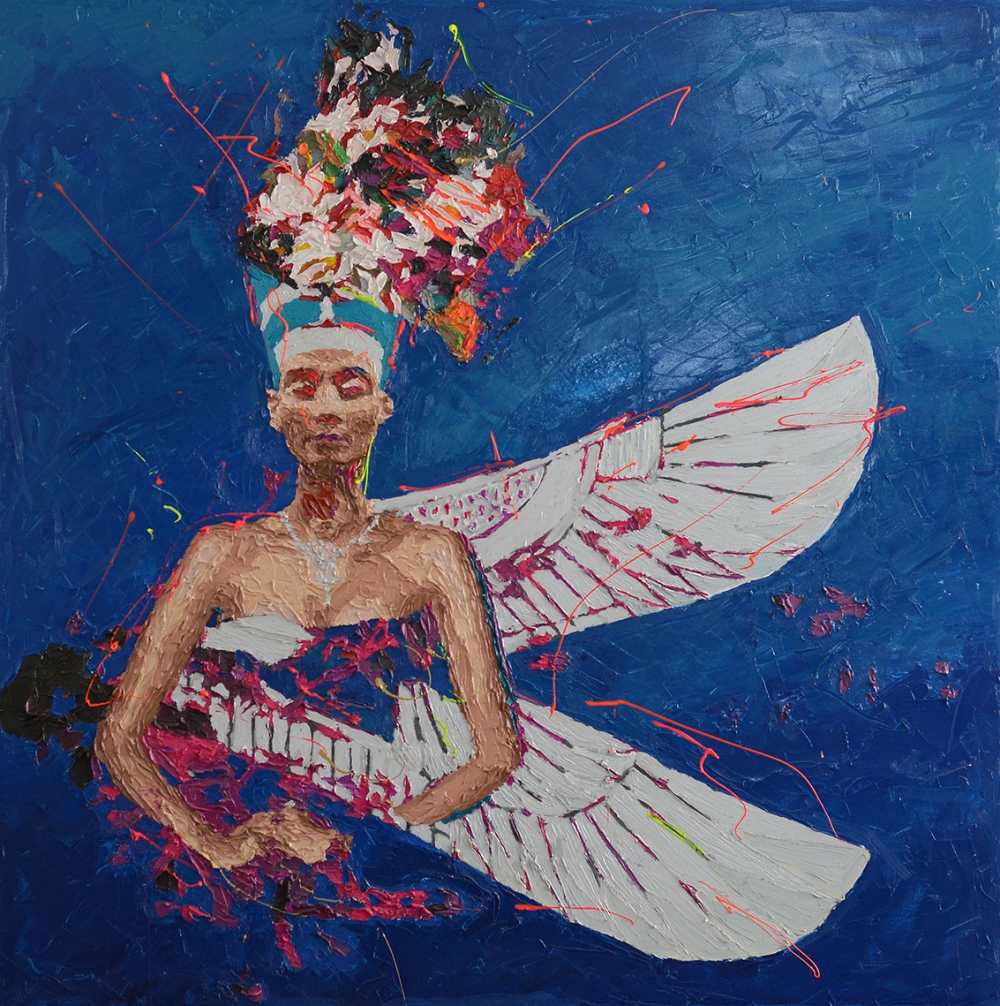 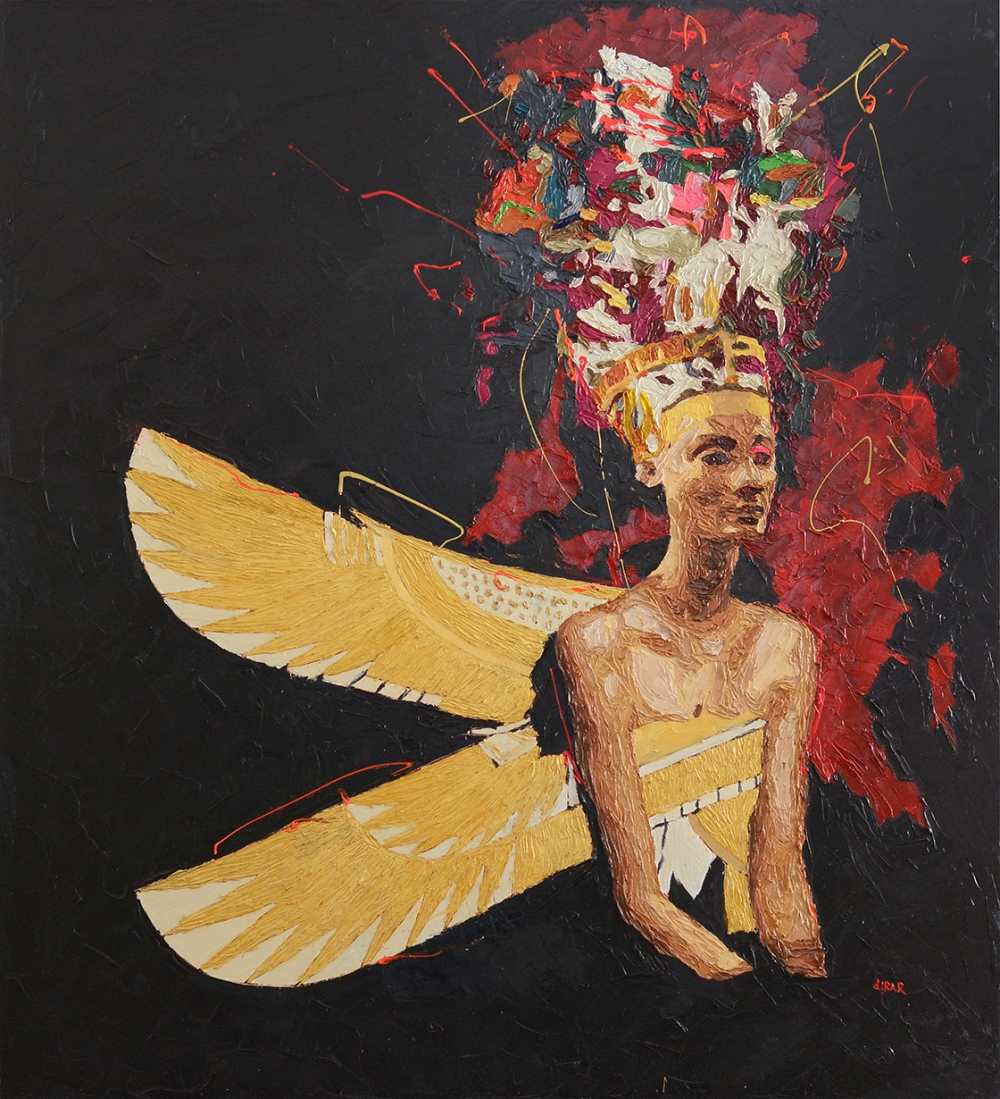 Hossam Hassan Dirar was born in Cairo, the capital of Egypt. This busy city with its rich heritage and multi-culture facets, inspired Hossam – as a kid – to explore the world around him and train his imagination to aspire to the undefined and aim to the stars and beyond. He is a graduate of Helwan University where he received the highest marks of his year for his graduation project.

Dirar is a multi-disciplinary artist who works with painting, video, sound, and installation art. His repertoire of exhibitions delves into questions of cultural identity, gender roles as well as socio-economic and political ideas.

According to the Chief Curator at Saatchi Gallery in London, Rebecca Wilson, Dirar is one of the most promising young artists from around the World to Invest In.

Based in Cairo's cosmopolitan neighborhood of Zamalek, Zamalek Art Gallery has been a hub of modern and contemporary Egyptian art for over 20 years. Its mission is to faithfully represent art pioneers in Egypt and the entire Arab region, as well as providing support and guidance to some of the most promising up-and-coming artists on the scene today.

“Queen Nefertiti’s beauty has gone down in history. I believe these beautiful paintings by Hossam Dirar will also leave a mark on this world.”

This sumptuous full-color volume retraces the highlights of the country's twentieth-century art world through the private collection of one of Cairo's most reputable private gallery owners. The 200 color reproductions of paintings from Sherwet Shafei's collection representworks from very early pione Read more...

'Gallery at the Walled Off'

The Walled Off Hotel is situated in Bethlehem, in the West Bank, in Palestine. The hotel, opened by the elusive artist Banksy in 2017, has only 9 rooms and is filled with original Banksy artworks. The hotel has been a great success since its opening and has attracted many new 'tourists' to what is a Read more...

We are proud to have Popovy Sisters as one of 100 creative voices at Vogue World project. Today the landscapes of fashion and culture are being radically reimagined, fueled largely by a global groundswell of new talent. In the world of one-of-a-kind dolls (OOAKD), the name Popovy Sisters is wri Read more...
Browse by category Recent posts Magazine archive