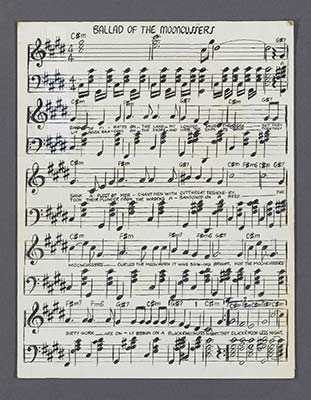 For decades, Gregory Blackstock has been creating these delightful re-workings of familiar and beloved songs, entirely for his own enjoyment. As an autistic savant, he relies on his prodigious memory of songs heard at the roller rink in his early childhood, learned from records and television, or referenced from his printed accordion music. He reviews the song in his head, before effortlessly changing it to a favorite key, usually a more difficult one.

Blackstock draws the staff, working freehand, with a ruler, or tracing over a copied blank staff, and then adds all musical notations by hand. If the melody has words, no matter how obscure, he will include all verses in precise handwriting. In creating a cover for the music, he exercises his visual creativity, providing relevant information about the song in text or image. Blackstock draws his covers with colored pencils and ink over colored construction papers, sometimes collaging photographs as illustrations.

The exhibition will include over thirty music covers and sheets. As with folded sheet music, the basic size is 11 x 8 1/2 inches and builds out from there depending on the number of sheets required to copy and rearrange a song. As you will see in our exhibition, in some cases the cover is an interesting work of art while in others, the musical staff and notes are very beautiful in their own ways.

Our exhibition will also include some of Blackstock’s musical chord and scale drawings in ink on white paper. In these works, the artist reveals his musical knowledge in illustrations of Major and Minor Key Chromatic Scales, Diminished Seventh Chord Scales, or Augmented Triad Chords.

We are featuring new drawings by Gregory Blackstock at the Miami Project art fair in December. We will exhibit his most recent drawings including The Great World Penguins, The Historic World Strongholds, and one of his fascinating Thesaurus Drawings wherein he writes all the words, both synonyms and antonyms, as a way to increase his vocabulary 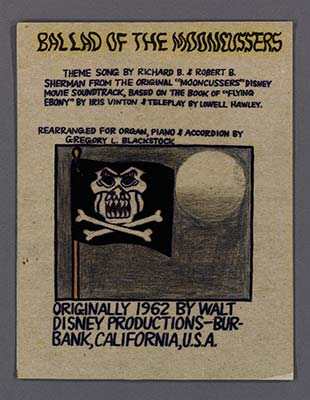