Keith Haring Exhibition at Gregg Shienbaum Fine Art, Miami. Doors open at 6pm Nov 12 2015. The following information was taken directly from Gregg Shienbaum's website. They are a brilliant gallery and this show will be very well executed. Be sure to visit their gallery if you are in Miami during Art Basel.

Keith Haring was and remains an irreplaceable symbol of the freedom that ate metropolitan streets and drank the night air of that wonderfully accursed place, the East Village. His art work has a marvelous capacity to convey the spiritual anarchy of an artist outside the normal confines. Haring has become the one most loved artists by the younger generations on every continent. He has gained an indefinable number of admirers who can be found everywhere, whether among the ranks of the wealthy and middle class, or on the impersonal edges of our cities, where walls and graffiti form the open air salon of the young. It is sobering to reflect the extent to which an artist, year after year, is able to exert an influence on the culture of vast numbers of people.

Haring was shaped by the street spirit of an overflowing and uncontrollable phenomenon of the eighties, know as “Street Art”. However, it is important to look at Haring’s whole body of work, and not just his graffiti work. Keith Haring seems to have been the spokesman for a “political” art with a powerful capacity for communication. His paintings on canvas, chalk drawings on black paper, and his graphic works were to become a far more subtle means of communication than the sledgehammer methods of graffiti on a grand scale.

Effortless, but also in the depth of its own signs, brought to the highest degree of formal childishness, Haring’s work shows how synthesis is not just the beginning, but also the endpoint of any progressive evolution. Beyond the aesthetic style, beats and throbs the morality of the artist, ready to attack the eyes, the heart, and the head of every observer.

The messages are easy to decode, but have behind them, a long path of ethical development that has endowed their contents with great structural force. Frenzied consumption, global dehumanization of the human race, increasing levels of pollution, sexual prohibitions, prejudice against homosexuals, and social phobias amidst systematic automatisms and robotisms, are just a few of the many messages that Keith Haring’s art works deals with.

The genius of his artwork not only lies in the messages, but also in the brilliant manner in which Haring tackled these risky subjects. The emergence of animals at the center of new and universal concepts of purity, children who find their way to the hub of the metropolitan scene, symbolic pyramids, cheerful pregnancies, flying angels, amorous couplings, these are just some of the images that Keith Haring’s whole course of development has clung to this double track of themes, that his irony turns into a single, pictorial body where gaiety and softness becomes the radiant surface of a complex body of work. 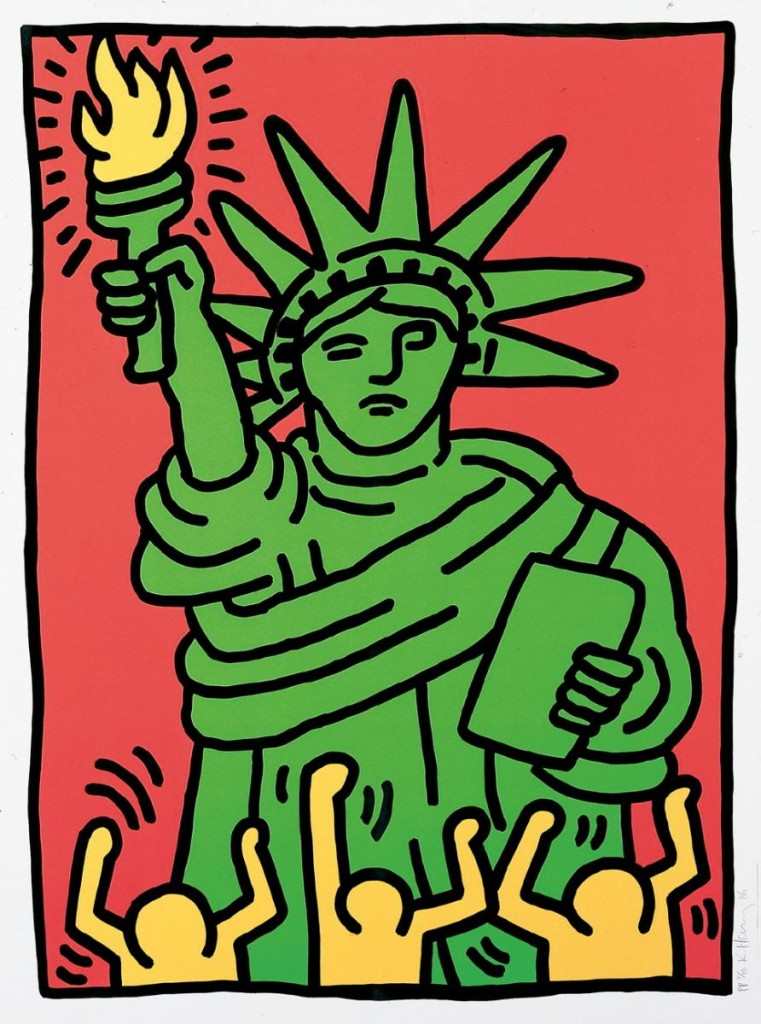 The Estate of Jean-Michel Basquiat is pleased to announce the release of a new Basquiat screenprint, "Hollywood Africans in front of the Chinese Theater with Footprints of Movie Stars," available exclusively through Pace Prints on October 21, 2015. Orders will be accepted on a first come, first ser Read more...

Frieze | London 14–17 October 2015. Frieze Art Fair is a fantastic event in London. Featuring around 160 of the worlds best galleries, there sure is something for everyone. Check out the official website HERE Read more...