In the summer of 2016 an adventurous crew of artists and filmmakers will head out into the middle of the ocean to pull off the most ambitious, dangerous and exciting mural project in history: PAINTED OCEANS.

Artist Tristan Eaton has assembled a team of world-renowned Graffiti and Street Artists to join him: Shepard Fairey, Futura 2000, How & Nosm, and The London Police, to paint murals on the historic Red Sand Sea Forts off the east coast of England. The new documentary feature, PAINTED OCEANS will be directed by Pascal Franchot and will capture the entire process as the artists live at sea for one month, battling weather and danger on all fronts while striving for their place in Art History.

The history behind the PAINTED OCEANS project goes back 74 years, but the execution will be completely modern. PAINTED OCEANS will be creating a robust digital campaign including: re-launching the Pirate Radio as a curated live stream, creating satellite mapping of the forts in high definition, interacting with the world in real time via live video and social media as well as a high-profile KICKSTARTER campaign.

Embracing the already legendary status of the Red Sands Sea Forts and the enormous audience for global street art, the PAINTED OCEANS project strives to be at the intersection of art, film and technology while breaking new ground in the realm of Public Art and Art History. Click here for more info and a video detailing the project!

Information courtesy of Shepard Fairey and the official website. If you want to support this project, click HERE

Take a look at the promo video 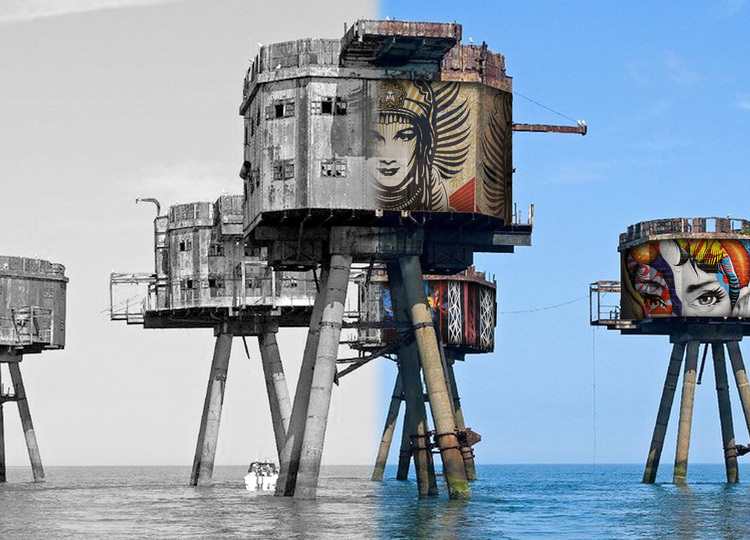 Here is what Shepard Fairey has to say

"Art to me is really about the challenge. An exotic location with a major challenge that most other people from the street art and graffiti world wouldn’t have access to, HELL YEAH, I want to do that!

Looking at things and saying, “Hey this has historic value,” whether it’s the earth itself or something that’s been erected upon it, it is very exciting to me. The idea of reminding people that preservation is really valuable, is something that makes me really proud to be part of The PAINTED OCEANS project. I’m humbled and flattered that Tristan Eaton asked me to join this team of world renowned street artists - How and Nosm, The London Police, Futura 2000, and Tristan. Be sure to follow The Painted Oceans for updates along the way"
- Shepard

Shepard Fairey Lists his house for sale in Los Angeles for $1.84 Million

The Los Angeles home of artist Shepard Fairey is going on the market for $1.84 million, according to real-estate agent Patricia Ruben of Sotheby’s International Realty. The Mediterranean-style home, built in the 1920s, has four bedrooms and measures roughly 2,500 square feet, Ms. Ruben said. Read more...

We are delighted that Castle Gallery have brought to market this wonderful Banksy original artwork. It is not often such a great original from Banksy comes on the market so we wanted to share it with you. This piece was on display at the 2002 Existencilism Exhibition in LA. Read more...

Pop Art was the visual art movement that emerged in the USA and Britain in the 1950’s and 60’s. It brought a sense of optimism during the post war consumer boom and grew alongside the globalization of popular music and youth culture. Artists became influenced by things like supermarket p Read more...
Browse by category Recent posts Magazine archive